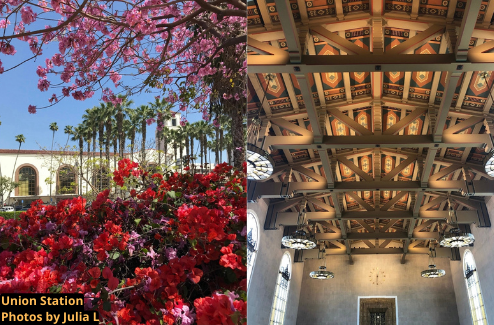 Welcome to a story about Los Angeles’ Union Station, known as America’s “Last of the Great Rail Stations!” Have you visited this iconic building? If not, or if it’s been a while, hopefully this story will inspire you to visit soon.

So, how did Union Station come to be? First, let’s examine the stations that preceded it. The first railroad to come to Southern California was the Los Angeles and San Pedro Railroad in 1869. Although this was primarily used to transport freight from the San Pedro ports into the city, it assisted in Los Angeles’ rapid growth from that point on. Not too much later, transcontinental passenger rail started entering the city with Southern Pacific Railroad in 1876, Santa Fe Railroad in 1887, and the Salt Lake Railroad (later called Union Pacific) in 1905. Each of these connected LA to various other parts of the country. In 1900 LA’s population passed 100,000, and by the 1920’s it was approaching one million – Los Angeles was booming! 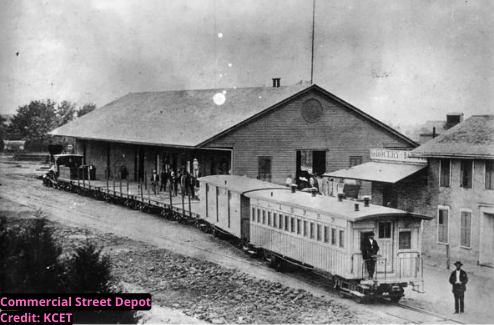 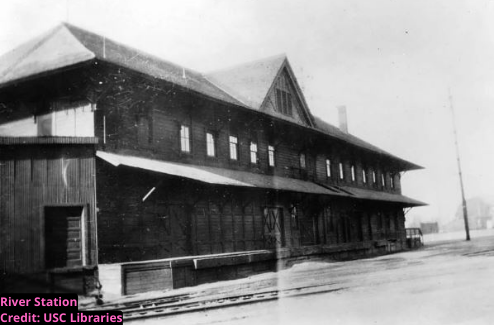 By 1876 it was replaced by River Station, where today’s LA State Historic Park in Chinatown is located. The Southern Pacific Railroad operated from this station and was the first to connect LA to the United States via trains coming in from San Francisco. (to the left, River Station) 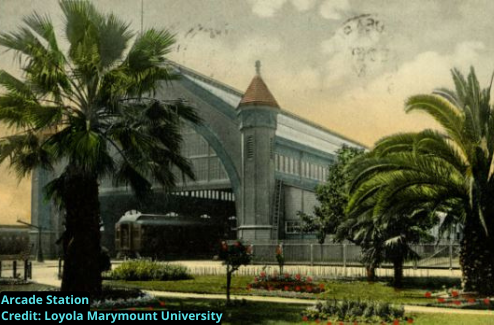 By 1888, River Station was replaced by the Arcade Station, which was located off Alameda Street between 5th and 6th Streets, and which became the new home for Southern Pacific. A fun fact about this station is that the oldest fan palm tree in Los Angeles was transplanted there from its original wild home in 1899! Situated in front of the train station, it greeted visitors and new settlers and confirmed expectations of Los Angeles as a magical land of sunshine. (to the right, Arcade Station) 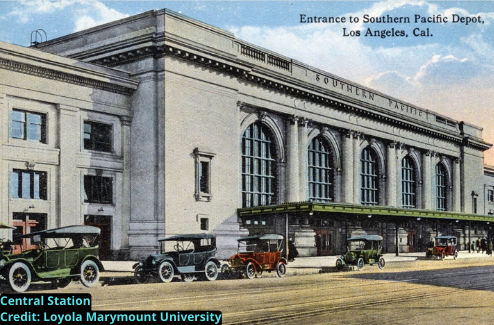 When the Arcade Station was replaced by Central Station in 1914, the tree was eventually moved to Exposition Park where it still stands today – now over 170 years old! (You can learn more about the history of palm trees in Los Angeles here) Central Station continued to serve Southern Pacific, but Union Pacific also began using this station when their previous depot (located on the east side of the LA River on 1st street) caught on fire in 1924. (to the left, Central Station)

When the Santa Fe Railroad entered Los Angeles, the trains initially went to River Station, then Arcade Station and finally transferred to Santa Fe’s own La Grande Station at 2nd Street and Santa Fe Street. La Grande Station operated between 1893 and 1939, but Union Station’s opening resulted in the consolidation of Santa Fe, Union Pacific, and Southern Pacific services into one central terminal. La Grande Station was demolished in 1946 and Central Station in 1956. (to the right, La Grande Station)


Two proposals were made in the 1920s: build a network of elevated rail lines that would connect the various terminals or build a new central station. The rail companies did not like the idea of a central station, however, the city officials were not keen on elevated railways. This conversation started in 1916 and was finally put to a vote in 1926. The people of LA went to the polls to make their choice, and the Union Station concept won (61% to 39%). The location of the station was a separate ballot measure, and the Alameda Street site was chosen (more narrowly 51% to 49%). The Alameda Street location was close to the original founding site of the city, which was the center of Chinatown in the 1920s. (You can read more about LA’s Chinatowns here) 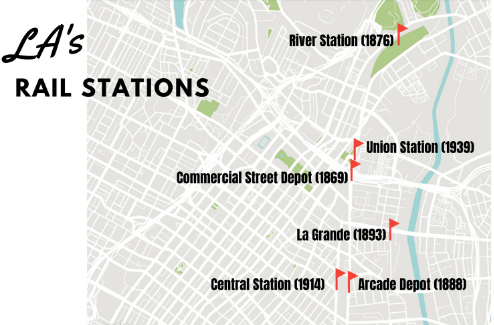 The decision to build Union Station was to help consolidate services into a central terminal while also making the city safer. The city streets had become perilous and crowded, with the rail lines running full size trains alongside regional trolley cars, pedestrians, horses and horse-drawn carts, and eventually automobiles!

Construction on the station began in 1933 and was completed in 1939 at the cost of $11 million (about $209 million in 2021). Architects John and Donald Parkinson (father and son) were chosen to design the station. John Parkinson was also the architect for the Central Station in 1914 as well as City Hall in 1928, so he was well known and an obvious choice to design this new station. For Union Station, the father and son team chose a blend of Spanish Colonial, Mission Revival and Art Deco styles, referencing both California’s past as well as excitement for the future. It is truly a beautiful architectural wonder to behold! 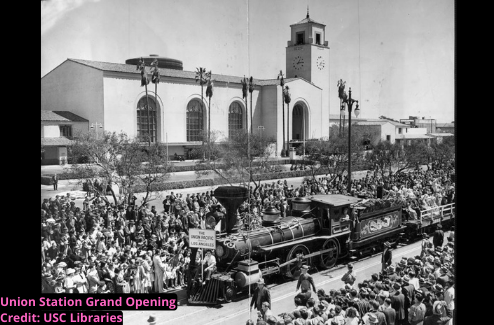 The grand opening of Union Station was on May 3, 1939. The theme of the celebration was "Railroads Build the Nation." The Mayor and the Governor were in attendance, and the county Sheriff was the Grand Marshal. The festivities lasted 3 days and over 500,000 people attended. The celebration included floats, trains, and musical performances, including a 300-piece band on the last day! On the final evening of the celebration the three major railroads had a lavish celebration dinner at the Biltmore Hotel. This was indeed a monumental and city-changing event for Los Angeles. (to the right, Union Station Grand Opening)

We hope you will join us sometime soon on our LA’s Beginnings tour to see Union Station for yourself. You’ll be glad you did!