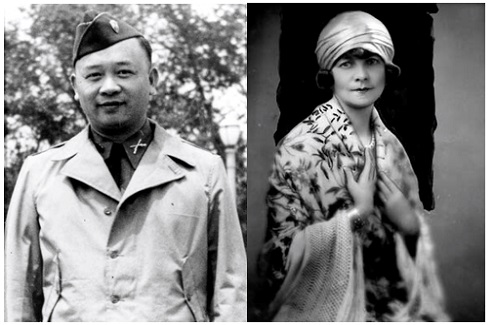 If you are a student of American history, you may know about some of the challenges that Chinese immigrants have faced over the years. If you are a resident of Los Angeles, you may know that the Old Chinatown that existed from the 1880’s to the 1930’s was razed to make way for our grand train depot, Union Station. And if you’ve been paying attention to pop culture over the last 50 years, you might know that there are relics of Bruce Lee and punk rock that adorn the central plaza of Chinatown today. What you may not know is that at one point, today’s Chinatown had a neighbor and a competitor called… China City!

After the demolition of Old Chinatown in 1935, the Chinese community decided to rebuild what they had lost. And directly across the street from the heart of that New Chinatown, the gates of China City were also being erected. Allow us to introduce you to Peter SooHoo Sr, the main visionary behind New Chinatown, and Christine Sterling, the creator of China City. Peter SooHoo Sr grew up in Old Chinatown, was the first person of Chinese descent to graduate from USC’s school of architecture and was the president of the Chinese American Association in the 1930’s. Christine Sterling - who was coming off her recent success of organizing and developing Olvera Street - was well-connected in society and looking for a new project to take on. She was not of Spanish/ Mexican or Chinese descent. Nor was she a part of those communities in a large way, but she had an idea of what Los Angeles should look like, and she hoped to celebrate its various cultures. 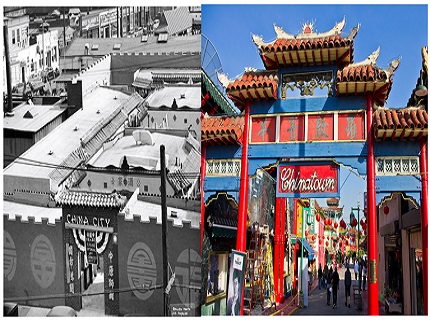 At one point SooHoo and Sterling attempted to collaborate, but their visions for Chinatown/China City just didn’t line up. New Chinatown was almost completely funded from within the Chinese community. It featured Chinese architecture inspired by Beijing’s Forbidden City, and supported Chinese-owned businesses on Chinese-owned property.  In contrast, the development of China City did not involve any Chinese people in the process, and was funded mostly by non-Chinese benefactors. For China City, Sterling oversaw the creation of a “Walled City” with sets from the blockbuster film The Good Earth (1937), curio shops, a Chinese Theater, Lotus Ponds, Chinese eateries, a temple, costumed employees, and…. Rickshaw rides! The mission statement of China City read: “American promoted, Chinese operated amusement center designed to attract tourists”

China City had its grand opening in July of 1938, just three weeks before New Chinatown. Despite the caricature of Chinese culture it relied on, China City was actually a commercial success and created a strong community among the Chinese who operated its businesses. During the time of its operation from 1938 to 1949, China City caught fire and burned down... Twice. Those who are cynical suggest that it was an act of arson. Those more level-headed, suggest it was an act of arson… All we truly know is that the second fire put it to rest.

Now all that's left of China City is… well, the parking lot for Philippe’s restaurant! And, while Chinatown has had its ups and downs - seen a major part of its population move away, evolved as all neighborhoods do - it’s experiencing a bit of a resurgence along with the rest of the LA area. New hip restaurants, vibrant festivals and world class art galleries bring people from all over to the streets surrounding the central plaza.

Here are some other fun suggestions of ways to experience Chinatown and what it has to offer with a guide from Discover Los Angeles Things To Do in Chinatown and Chinatown Summer Nights!