Home Arrow About Us
About LA Walking Tours
LA Walking Tours was formed in 2009 with the goal of engaging those with a hunger for learning about Los Angeles. The tours aim to inform our guests of the history of LA's vibrant neighborhoods, immerse them in the current developments of the city and prepare them for the exciting future ahead. Tours are tailored for tourists enjoying a brief stay and the seasoned local alike, providing an educational and captivating glimpse into our dynamic city. Each guest comes away learning something new and fascinating about the City of Angels!
Our Team 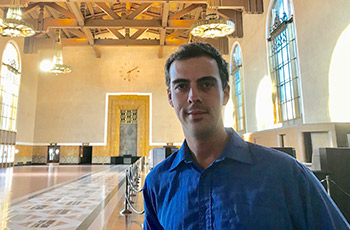 AJ grew up in Venezuela, in a culturally diverse household where American movies made a lasting impression on him. He set out to Los Angeles, knowing this was the city where he could nurture the future he envisions for himself. Los Angeles is that culturally diverse city that goes hand in hand with many amazing stories. AJ is passionate about learning and sharing great stories like those, that stay with people and that move them. Guiding tours is an excellent opportunity for AJ to share Los Angeles' amazing stories with visitors from all over the world. 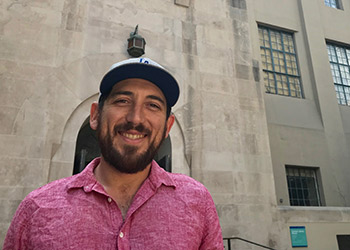 Phil was born and raised in the foothills of the San Gabriel Mountains just to the north of the City of Los Angeles, and has lived in Southern California his whole life. Constantly curious about his birthplace, he loves to read and talk about the city and its interesting path to modern metropolis. Phil enjoys the outdoor opportunities LA provides, having climbed most of the peaks visible from the tallest downtown buildings. He also enjoys the varied culinary options available in the city, especially the world famous Dodger Dog! 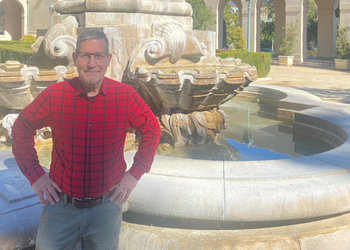 As a researcher, creator and presenter, Tom comes from a background of live productions, plays, documentary and feature films. Born in Detroit and raised in the suburbs, he majored in Performing Arts at Wayne State University, then studied with the Detroit Repertory Theater before moving west. After 2 years as a Universal Studios tour guide he was hired as a writer/producer for Nickelodeon TV’s “Mr. Wizard’s World”. He was then fortunate to work in both American and Natural history museums creating exhibits, and producing/directing tours, and award winning films.