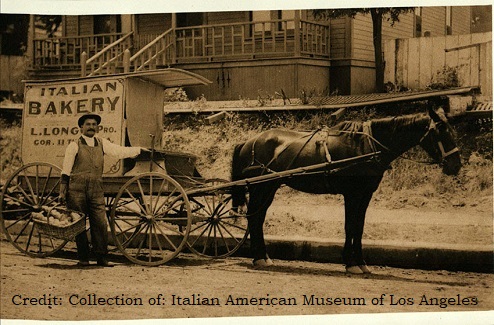 Many people made the city of LA what it is today. They came from all over the world and brought their traditions, culture, skills, and talents to this city. In this story we will explore some of the Italian immigrants who came to LA in its early days.

The first Italian to come to Los Angeles was 31-year-old Sardinia-born Giovanni Leandri, in 1827. Soon after, he built a general store on Calle de los Negros, now North Los Angeles Street. His house was near where the Plaza Firehouse now stands. In time other Italians followed and integrated well with the Spanish and Mexican residents. Over time marriages between Italians and Latinos became very common.

Alcohol - and wine in particular - played an important role in many Italians’ lives. In 1838, Matias Sabuichi built a house on the plaza, and started a saloon in the area. Soon other Italians came and began growing grapes to make wine. Giuseppe Gazzo and Giuseppe Covaccichi operated a winery on Alameda Street together. Covaccichi built the Pelanconi House on Calle de las Vignas or Wine Street between 1855 and 1857. (In 1877 the City Council changed the name of the street to Olvera Street in honor of Augustin Olvera, the first judge of the County of Los Angeles.) The Pelanconi House is the oldest brick building still standing in LA. Wine was made there and outside the house today grows a grapevine that dates from the mid-1800s!  The Pelanconi House now houses a very popular Mexican Restaurant, La Golondrina opened in 1924, but signs on the outside tell its original story. Antonio Pelanconi from Lombardia, Italy worked with Gazzo and Covaccichi to learn the wine-making business. In 1871 he purchased Covaccichi’s house and winery, using the first floor for wine and brandy storage. In 1877 Pelanconi turned over the winery operation to his partner, Giacomo Tononi. Tononi later partnered with Antonio Valla, also Italian, and they sold the business in 1887 and retired quite wealthy. Los Angeles’ Mediterranean climate encouraged immigrants to engage in wine-making endeavors in their new city. By 1869 Los Angeles was the wine capital of California where 4 million gallons of wine were made annually! 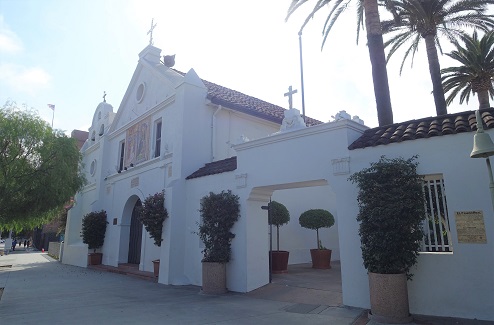 Across the street from Olvera Street stands Our Lady Queen of the Angels Church, the oldest Catholic Church in Los Angeles (completed in 1822). In the 1800s, anti-Catholic sentiment was prevalent on the East Coast. This was not the case on the West Coast, and Italians could practice their faith without fear. Italians were among the city’s religious leaders and in 1857 an Italian, Father Blas Raho, was made pastor of the church. He was a well-respected member of the community, and he worked tirelessly to restore the church in the 1860’s.

Around the corner from Olvera Street on Main Street is the Italian Hall. It was once a fuel and feed lot owned and operated by Frank Arconti, a prominent member of the Italian community. 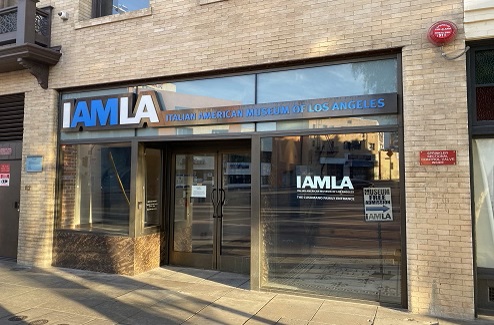 Curiously enough, a French woman named Marie Ruellan hired the Pozzo Construction Company to build the hall in 1907/08 for Italians to use for their meetings, holiday celebrations, weddings, and miscellaneous community events. Mrs. Ruellan and Mr. Arconti were friends and she leased the hall to him to manage as soon as it opened. In addition, the Società Italiana di Mutua Beneficenza (The Italian Mutual Benefit Society) had its offices on the second floor. Currently the Italian Hall houses the Italian American Museum of Los Angeles (IAMLA). Since seven of the thirteen buildings on Olvera Street were either built by or used for long periods of time by Italians, it is great that the IAMLA is now there to tell more of that story, and the story of LA in general! 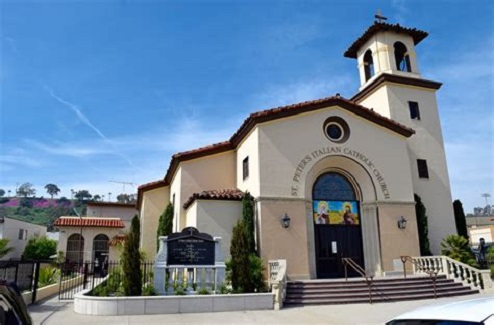 Saint Peter’s Italian Catholic Church on Broadway in Chinatown was founded in 1904 to care for the spiritual and social needs of the Italian immigrants who came to America in search of religious, social, and economic freedom. It was built in the area that was known as Little Italy at the time due to the large number of Italians living in the area. Italians from all over LA considered it their church for worship and for communal and cultural celebrations. Still today, it meets the spiritual needs and faith-based traditions of the Italians in Los Angeles.

Another piece of Italian history that still exists in LA today is the San Antonio Winery, which has been in continuous operation since 1917! 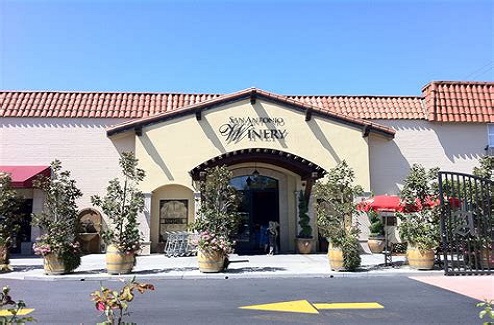 In 1910, Santo Cambianica from Lombardia, Italy arrived in New York and soon afterwards headed to Los Angeles. He immediately began working hard, saving money, building relationships and planting his feet into the Italian-American community. He founded the San Antonio Winery a few years later, naming it after his Patron Saint Anthony.  In 1919 the city was faced with Prohibition and the majority of LA wineries went through hard times. Santo, however, was granted permission to make wines for the Archdiocese of Los Angeles for sacramental and ceremonial purposes. His strong relationship with the church saved his winery! San Antonio Winery remains the oldest and largest producing winery in Los Angeles with over 100 years of winemaking. In fact, in the early 1960’s Los Angeles’ Cultural Heritage Board designated the winery Cultural Monument Number 42! Santo died in 1956 and his nephew Stefano Riboli, who had apprenticed with Santo since 1936, took over the management of the winery per his Uncle’s wishes. The third generation of Ribolis still manages the winery today!

Italians are just one group of immigrants that influenced the growth and development of LA. There are more stories to be told of people who came to LA and influenced the arts, architecture, religion, cuisine, language, customs and much more to our city. Stay tuned for more stories about other cultures and people that made their way and left their footprint to shape the city we love today.

Join our LA’s Beginnings tour to see these historic Italian structures while we walk Olvera Street.