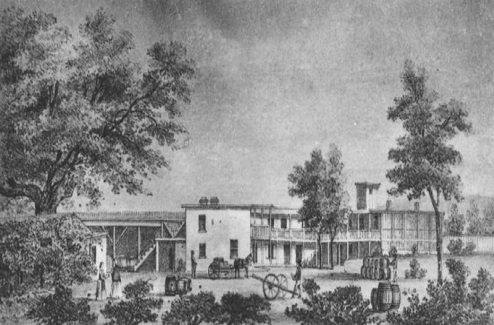 Did you know that French was once the second most spoken language in LA? Well, it was! Let’s see how that happened.

During the second half of the 19th century and into the 20th century there was a large French colony in Los Angeles. During its time it was an influential and thriving community. Wine making was a big reason for its success.

In 1832 a gentleman from Bordeaux, France named Jean-Louis Vignes moved to the small pueblo of Nuestra Señora la Reina de Los Angeles, or as we know it, “Los Angeles.” He bought 104 acres of land and planted the grapevines that would eventually help make local wine, and even a California Champagne! He also planted the first orange grove in LA. His success story made it back to France and soon after, an influx of French citizens started migrating to Los Angeles. City Hall in Civic Center is currently located on the original site of Vignes’ home, which was the center of the French community in LA. 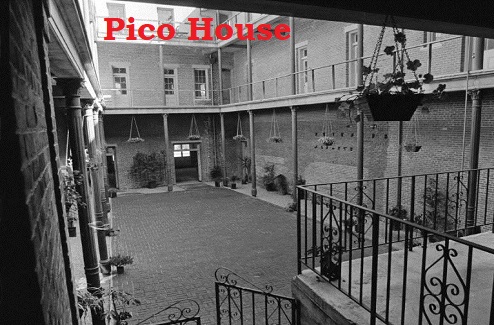 In the 1850’s and 60’s many French came to California from the struggling Basque region of France. They were drawn by the Gold Rush and their hopes of becoming rich. Unfortunately, they were not very successful in gold mining. So, they moved to other parts of California where they turned to the skills and careers they had in France: as farmers and sheepherders. They also became wine makers, walnut farmers, bankers, grocers and clothiers. In Los Angeles they also supplied the city with ice and salt, opened bakeries (yum!) and helped to build LA’s first residential water system. They were busy! Two of LA’s early mayors were French: Damien Marchesseault (1859 – 1860) and Prudent Beaudry (1874 – 1876).

So, all this activity led to French becoming LA’s second language by 1860. LA was still a violent “Wild West” town at that time, so the French residents actually commissioned a unit of the French Foreign Legion to come protect them. They also formed a society where the members paid $1 a month in order to see a doctor as needed for only 50 cents per visit, called the Societé Française de Bienfaisance Mutuelle de Los Angeles. 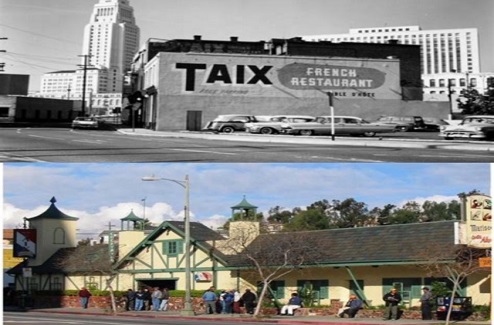 At the corner of Hill and College Streets in present-day Chinatown is the Pacific Alliance Medical Center. This was originally a French hospital that opened in 1869, LA's first private, nonsectarian hospital which was the heart and soul of the French community for decades to come. Until recently outside the medical center, there was a statue of Joan of Arc from the French hospital days. (The statue disappeared one day and its current location is a mystery!) The French hospital was private and for the members of the society mentioned above.

The Pico House, located in the El Pueblo area, was built by the last Mexican Governor of California, Pio Pico. It was completed in 1870 as LA’s first three story building. By the standards of the time and place, it was quite opulent. It had 80 bedrooms, 21 parlors, and a French restaurant arranged around a central courtyard with a fountain and an exotic-bird aviary, all with gas light and running water. The fact that Mr. Pico put a French restaurant in his hotel and not a Mexican restaurant showed the influence and prosperity of the French in LA at this time. 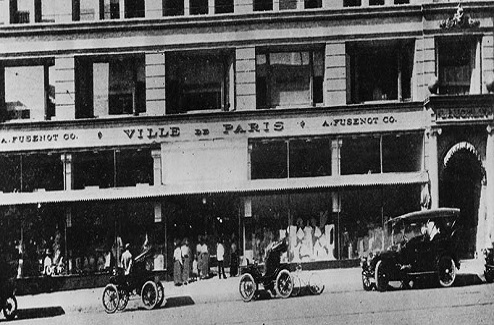 In time, the French quarter became a popular place for Angelenos to eat and stay.  There were restaurants, bakeries, boarding houses and hotels all in the area. There was even a French department store called Ville de Paris, which was eventually replaced by Grand Central Market in 1917. Probably our most famous LA French institution still open to this day is Taix restaurant, currently located in Echo Park. Previous to its Echo Park location, Taix started in 1882 as the Taix French Bread Bakery, which evolved into a full scale restaurant by 1927. Taix was located in Downtown Los Angeles until the 1960’s, when the property was eventually razed for an office building. The Echo Park location has continued to be in operation since 1962.

By 1900 the French Colony had grown to about 5,000 (At that time, the city of Los Angeles had a population of 100,000).  Soon after 1900, the French community began to disperse all over Los Angeles, Orange, and Riverside counties. Prohibition also greatly affected the commercial life within the original French town. The French (and Italian) restaurants served meals that took a long time to prepare, and between courses their patrons would enjoy wine and beer to fill in the time. After 1920, when alcohol became unavailable, patrons began to frequent other restaurants or cafeterias that served meals more quickly.  Finally, the construction of Union Station in the 1930s destroyed not only the original Chinatown, but also French boarding houses and hotels. Because of the loss of the original Chinatown, many Chinese and Chinese Americans then moved into the old French quarter, and the area became the new Chinatown.

Learn more about our early French culture on our LA’s Beginnings tour!